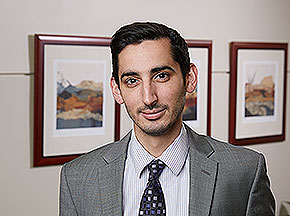 As a member of Gallagher’s renewable energy team, Michael LaRocca primarily represents lenders in the financing and development of solar energy projects. In addition to his renewable energy work, Michael has also represented a number of clients in general corporate matters and non-renewable financings. His background in law and business allows him to offer clients solutions to both legal and commercial problems. He takes a measured, practical approach to his work, carefully weighing the costs and the benefits of every option before advising a client on a course of action.

Michael is a recipient of the University of Maryland’s William P. Cunningham Award, a faculty honor given to graduates who have demonstrated excellence in the classroom and who have served the university community. He was also selected for membership in the Order of Barristers, a prestigious society of US law school graduates.

Michael is a sports fanatic who enjoys playing pick-up soccer games as much as he enjoys competing in fantasy football leagues. Whether traveling the world or watching movies on the couch on the weekends, he also loves spending time with his wife, an internal medicine and pediatrics resident at the University of Maryland.