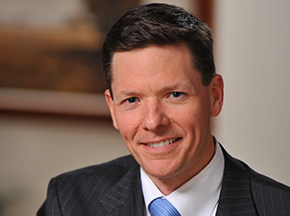 Dave Kinkopf is a litigator with extensive experience as lead counsel in disputes involving civil litigation, religious and nonprofit organizations, employment law and land use. He represents entities and individuals in complex discrimination, constitutional, and commercial litigation in federal and state courts. A number of Dave’s employment and land use lawsuits resulted in published opinions.

In addition to litigation, Dave advises entities on sensitive risk management as well as strategic and governmental relations issues. He is frequently invited to speak about the unique legal issues that face religious and nonprofit organizations.

In 2007, Dave was named a Knight of the Order of St. Gregory the Great, a papal honor from Pope Benedict XVI, in recognition of his service to the Archdiocese of Baltimore.

He served a clerkship with the Honorable J. Frederick Motz, Chief Judge of the United States District Court for the District of Maryland prior to joining the firm.

Dave is a ranked lawyer in the Chambers USA 2022 guide in Litigation: General Commercial, and is recognized by Best Lawyers in America 2020 as one of Maryland’s leading litigation lawyers.