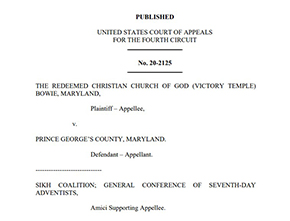 In a published 3-0 decision issued November 3, 2021, in The Redeemed Christian Church of God (Victory Temple) Bowie, Maryland v. Prince George’s County, Maryland, the U.S. Court of Appeals for the Fourth Circuit affirmed an injunction in favor of Victory Temple that will allow the Bowie-based church to proceed to the next stage of development as it seeks to build a new church home for its growing congregation.

The Fourth Circuit agreed with the district court that in denying Victory Temple’s application for a water and sewer category upgrade, and thus precluding the church from developing the property it purchased three years ago, the County violated the church’s religious exercise rights under the Religious Land Use and Institutionalized Persons Act of 2000 (RLUIPA). Under RLUIPA, a state or local government is prohibited from implementing land use regulations in a manner that imposes a substantial burden on religious exercise, unless the government can demonstrate that the imposition is the least restrictive means for furthering a compelling governmental interest. In this case, the County asserted that traffic safety constituted a compelling interest, but it failed to establish that denial of Victory Temple’s application for a water and sewer upgrade was the least restrictive means of furthering that interest. The County did not conduct a traffic study or otherwise demonstrate that it fully and adequately considered any alternatives, such as roadway improvements.

The Fourth Circuit’s reasoning aligned with the reasoning of U.S. District Judge Deborah K. Chasanow, who observed that the County “wholly fail[ed] to link its compelling interest to the denial of Victory Temple’s application for amendment.”

“Our client is grateful for the Court’s decision and its vindication of the rights of faith communities under RLUIPA,” said Gallagher litigation partner Meghan Casey.

Gallagher achieved a similar RLUIPA victory in Reaching Hearts International v. Prince George’s County, which was cited by the district court and the Fourth Circuit in their opinions in the Victory Temple case.

Background:
In 2018, a rapidly growing evangelical and Pentecostal church, Victory Temple, purchased a property at 14403 Mount Oak Road in Bowie, with the intent to build a new home for its expanding congregation. Under the property’s zoning category, churches and other houses of worship are permitted as a matter of right. Prior to the purchase, Victory Temple hired an engineering firm to conduct a feasibility study; the engineering firm concluded that the church’s proposed development was feasible. The church then went on to complete a required initial step of applying for a water and sewer category upgrade from Category 5—Future Community Service to Category 4—Community System Adequate for Development Planning. Although all County agencies that evaluated the application recommended approval, including the Office of the County Executive, the County Council denied the application, effectively causing Victory Temple’s development plans to stall. Victory Temple then filed a lawsuit in federal court against the County, claiming that the denial decision imposed a substantial burden on Victory Temple’s religious exercise rights in violation of RLUIPA, a statute Congress enacted to prevent such burdensome or discriminatory land use decisions absent a compelling justification. Victory Temple was represented by Ward B. Coe III, Meghan K. Casey, and Joseph C. Dugan of Gallagher Evelius & Jones.

In a 30-page Memorandum Opinion issued September 9, 2020, U.S. District Judge Deborah K. Chasanow held that the County violated RLUIPA in denying Victory Temple’s application for a water and sewer category change. Stating that the case was “not a close call,” Judge Chasanow explained that the denial of Victory Temple’s category change request “has prevented it entirely from developing its proposed church on the Mount Oak Road property. On October 2, 2020, Judge Chasanow entered a permanent injunction requiring the County to amend its water and sewer plan to upgrade Victory Temple’s property to Category 4. The County sought review of Judge Chasanow’s Order by the U.S. Court of Appeals for the Fourth Circuit.

Outcome:
In a published opinion issued November 3, 2021, and authored by Judge Robert B. King, the U.S. Court of Appeals for the Fourth Circuit affirmed the injunction Order in favor of Victory Temple. The Fourth Circuit’s ruling will enable Victory Temple to proceed with confidence to the next stage of development as it seeks to build a church to accommodate its more than 2,000 congregants. The ruling also confirms that Congress intended RLUIPA to be expansive in scope and to apply to the implementation of any land use regulation (however that regulation is classified) that involves an individualized assessment of property.